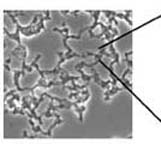 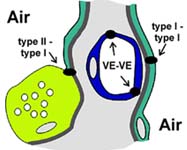 The lung provides a barrier that enables the exchange of oxygen and carbon dioxide between the atmosphere and bloodstream. The part of the barrier which faces the atmosphere (airspace) is covered by epithelial cells with different characteristics, depending upon the location in the lung. The terminal airspace (alveolus), where gas exchange occurs is covered by a layer of cells collectively known as the alveolar epithelium. The alveolar epithelium is heterogeneous monolayer consisting of at least two cell types, type II cells (yellow) and type I cells (aqua), which are in direct contact. Type I cells make up over 90% of the alveolar epithelial surface area, which is consistent with their role as the site of gas exchange between the atmosphere and capillary blood. However, there are roughly twice as many type II cells as there are type I cells. Assuming that both cell types are uniformly distributed throughout the alveolar epithelium, this suggests that nearly all type I cells are likely to be in direct contact with at least one type II cell, as well as with other type I cells. 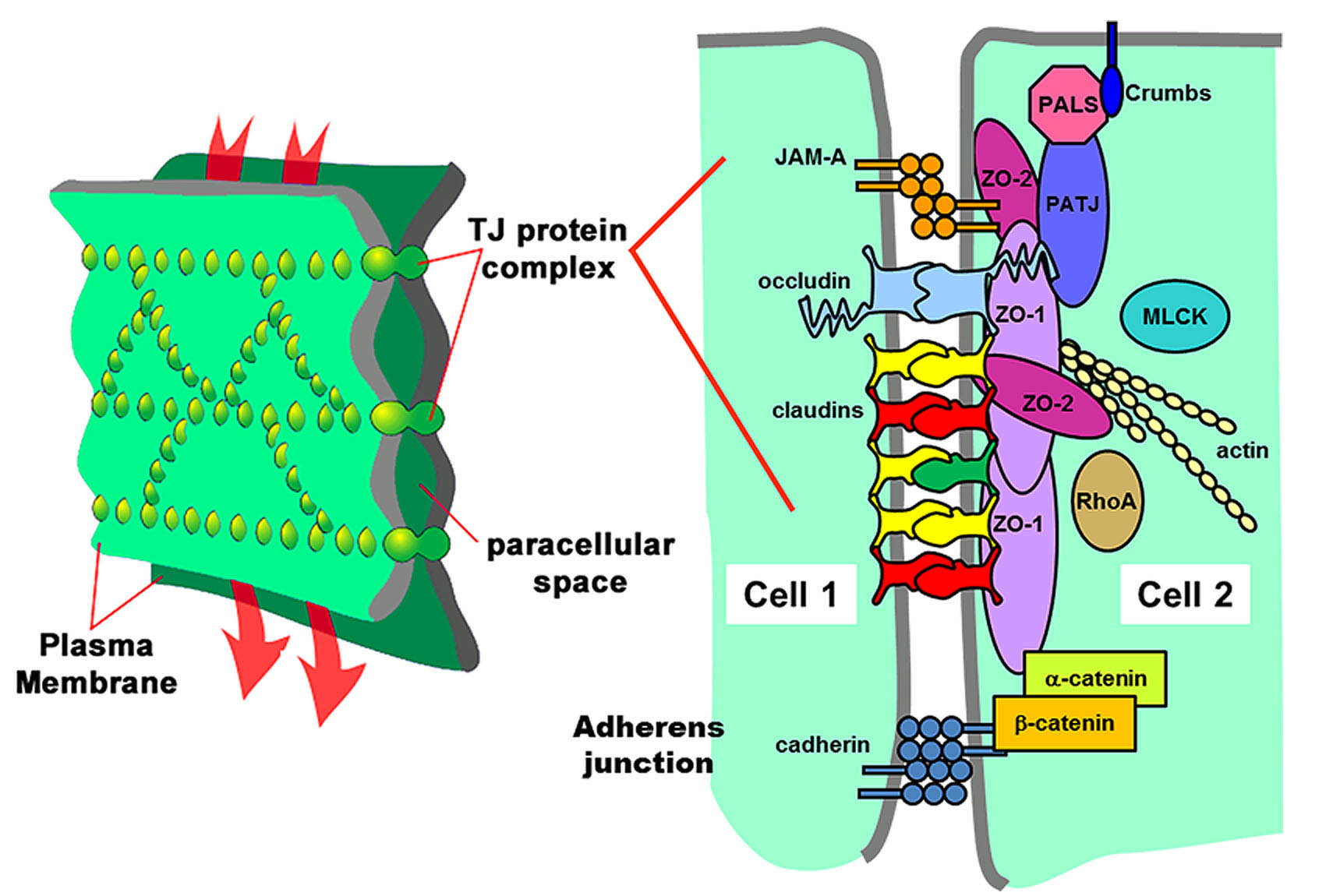 At these cell-cell contacts there are a number of distinct elements which contribute to the function of alveolar epithelium, including tight junctions. Tight junctions are the primary mechanism that regulates whether the epithelium is tight or leaky. A primary goal of my laboratory is to use molecular and cell biological approaches to define roles for different claudins in normal lung barrier function and in pathologic conditions such as acute respiratory distress syndrome (ARDS). A long term goal is to develop methods to augment alveolar barrier function as a means to improve the outcome of patients with ARDS and in other lung diseases, including Cystic Fibrosis.

Tight junction permeability is primarily controlled by proteins in the claudin family that form a seal to both restrict paracellular diffusion and permit specific transport of ions between cells across the epithelial barrier. In the alveolus there are three predominant claudins: claudin-3, claudin-4 and claudin-18. Using model type I alveolar epithelial cells in culture and adenovirus expression vectors, we found that alveolar permeability is sensitive to the ratio of claudin-4 to claudin-3 expression. Claudin-4 increases alveolar barrier function and has a protective effect whereas claudin-3 promotes paracellular permeability. Other minor claudins expressed by these cells can also potentially affect tight junction permeability. In addition, other classes of tight junction proteins, such as JAM-A and ZO-1 influence tight junction assembly and permeability. Current research in the lab focusses on defining how tight junction proteins assemble and function at a molecular level using biochemical analysis and imaging methodology.

In addition to tight junctions, we also study communicating junctions or gap junctions. Gap junction channels are composed from proteins called connexins that enable the direct diffusion of molecules from one cell to it's nearest neighbor. These molecules include metabolites (ATP), antioxidants (glutathione), signaling molecules (cAMP, inositol trisphosphate) and ions (calcium). In other words, gap junctions enable cells in a tissue to be metabolically coupled to act as an integrated system. Whether cross regulation between gap junctions and tight junctions plays a role in the lung injury response remains an open question.